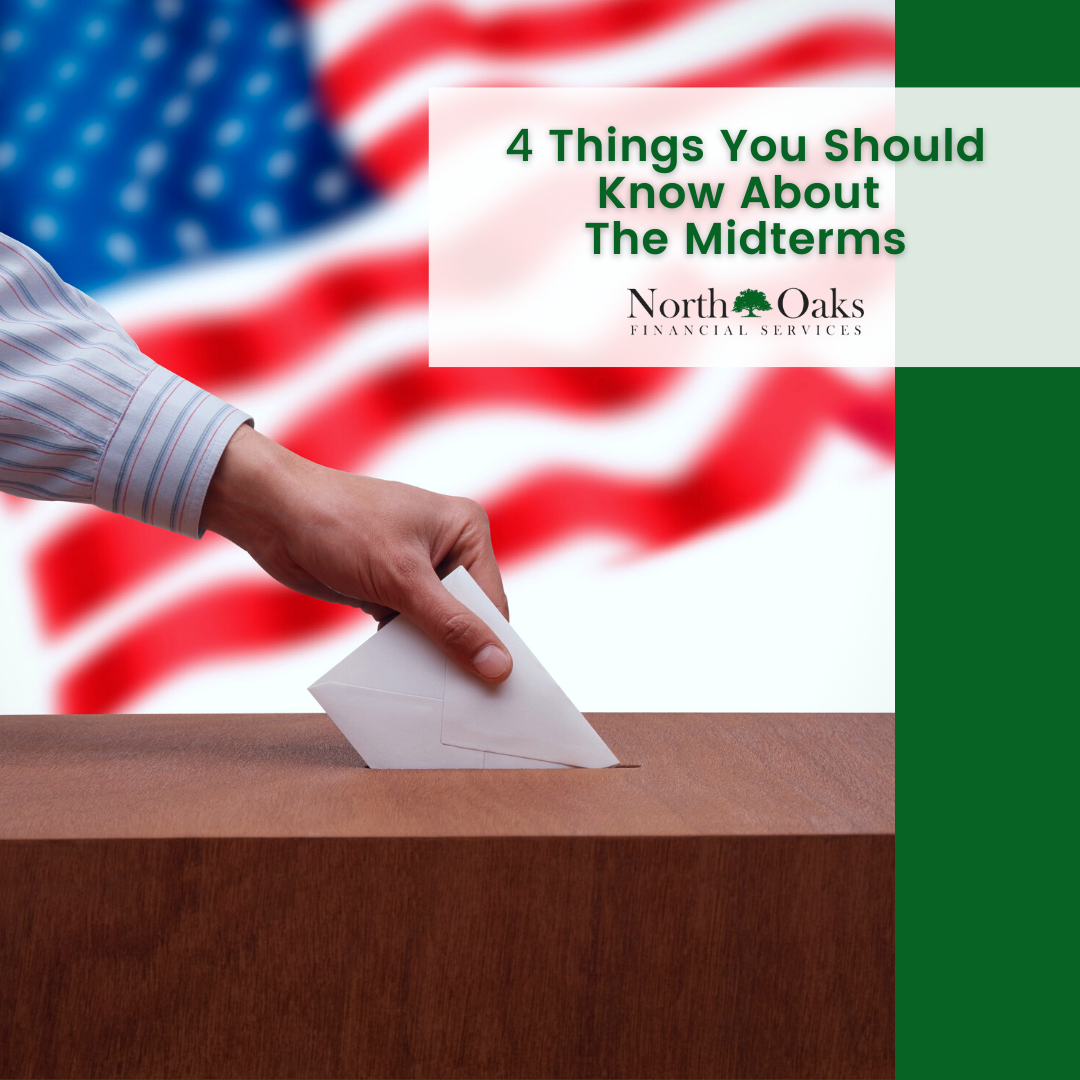 4 Things You Should Know About The Midterms

With elections right around the corner, many clients have been asking me what the results could mean for the markets.  So, without further ado, here are four things you should know about the relationship between midterms and markets.

1. The stock market usually dips before a midterm election.

As you know, this has been a rough year for the stock market.  Both the Dow Jones and the S&P 500 have flitted in and out of bear market territory for several months.  But while this type of volatility is never fun, in a sense, it’s pretty typical.  Why?  Because, historically, markets have fared the worst during midterm-election years.  In fact, according to one study, the S&P 500 averages a 19% decline in the months before a midterm!1

Of course, there are many reasons why the markets rise and fall.  The single biggest reason this year, of course, is stress over inflation and the Federal Reserve’s response to it.  But midterm elections often tend to drag the markets down on their own.  The reason can be summed up in a single word: Uncertainty.

As you can imagine, the months leading up to a midterm come with a lot of questions.  Which party will control Congress come November?  What new legislation can we expect?  How will the results affect our taxes, healthcare, and budget?  Pundits earn their living by making predictions.  The fact is, no one knows what the future will bring until the future becomes the present.

The markets, of course, are allergic to uncertainty.  It’s the driving force behind many a market pullback.  And with so much uncertainty before a midterm election, it’s not surprising the markets would struggle.

2. After the fall comes the bounce.

Now for some good news: Historically, the markets enjoy a major rally in the third year of a president’s term.  The S&P 500, for example, usually climbs an average of 32% in the twelve months after a midterm election.2

This little bit of market wisdom is always true – and it’s especially worth remembering now.  You see, most years after a midterm, investors don’t have to worry about the threat of a recession.

For months, the Fed has been trying to follow an incredibly tricky recipe: Bring down inflation without bringing down the economy.  To do this, they have attempted to raise interest rates gradually and incrementally.  Unfortunately, the effects have been minimal thus far.  That means more rate hikes are likely in the future.  Each one brings an increased risk of a recession in 2023, and if that happens, all bets are off regarding how the markets might react.

Indeed, history shows that the markets sometimes don’t do well after a midterm whenever there is slow economic growth mixed with high inflation and rising energy costs.  This was often the case in the late 1960s and 1970s…and it’s just the sort of stew our country finds itself in right now.

On the other hand, even a recession – real or merely imagined – doesn’t mean 2023 will be a bad year for stocks.  The markets move more on the expectation of future events than the events happening right now.  It’s quite possible that, as 2022 winds down, the markets will have already priced in the threat of a recession.  That means investors may be more likely to act on the anticipation of future good news instead of overreacting to bad news that was already expected.

Whatever the markets do after the midterms, though, there’s one thing you can rest easy about: It won’t matter which party “wins” in November.

3. Historically, the markets don’t care which party is in control of Washington.

Whether you’re a passionate Republican, devoted Democrat, or something in between, the fact is that the markets aren’t as partisan as people.

Talking heads can argue till the cows come home about which party is better for the markets, but I’m not going to get into that here.  (It’s not like you need another political pundit in your life!)  History shows that, while some years rise higher than others, the markets tend to rise after an election no matter which party is in power.

The reason for this is simple.  While politics certainly play a role, the markets are affected by many things – and Washington is not at the top of the list.  Corporate earnings.  Supply and demand.  Interest rates.  Inflation.  Housing prices.  Employment.  I could go on.  And while it’s true that the government has an influence on many of those things, the government does not dictate the daily rhythm of the markets.

If you think about it, the markets are sort of like our own bodies.  Our health is determined by what we eat, how much we exercise, our sleep, personal hygiene – and of course, by things we can’t control, like our own genes.  In this case, politics are to the markets what brushing your teeth is to your overall health.  Both very important, but not always the difference between life or death.

As I mentioned earlier, the S&P 500 usually rises after an election.  That’s been true regardless of which party is in the White House or controls Congress.  Where things get a little interesting is whether the government is united or not.

As of this writing, polls suggest that Republicans are favored to take back the House3, while Democrats will keep the Senate.4  If this happens, the result will be Congressional gridlock.  Gridlock is rarely fun for us citizens, but the markets tend to take it in stride.  That’s because gridlock usually means maintaining the status quo in terms of economic policy – and the status quo is something investors know how to handle.

Even if one party wins both chambers of Congress, though, you can make an argument for why it could be a boon for the markets.  For example, if Republicans take control, it’s unlikely we’ll see any new tax changes or regulations that could affect corporate earnings.  On the other hand, if Democrats retain both chambers, there’s a stronger chance of more fiscal stimulus, which investors have grown to rely on in recent years.

The point is that history shows the markets are as politically unbiased as you can get in this country.  Which brings me to the fourth and final thing to know about the upcoming midterms:

4. We never make investment decisions based on politics.

No matter if you wear a red baseball cap or a blue one, you should never make financial decisions based on politics.

This is especially true when it comes to your investments.  Choosing whether to buy or sell based on who you think will win an election is the opposite of having an investment strategy.  It’s investment speculation.  And given how passionate many of us are about politics, it can severely color our thinking.  How many people missed one of the longest bull markets ever because they disliked President Obama?  How many people missed the “Trump Bump” because they disliked President Trump?

It’s true that the midterms – both before and after - do impact the markets somewhat.  But that doesn’t mean we should change or abandon our strategy.  Make no mistake: This is an important time of year.  It’s a time when we, the people, get to decide the direction of our country, state, and local communities.

But it’s not the time for changing the direction you take toward your financial goals.

I hope you’re able to vote next month.  In the meantime, if you have any questions or concerns about Washington, the markets, or your portfolio, please feel free to contact me.  If there’s one thing I can guarantee, it’s that I’m easier to get in touch with than your local politician!

On behalf of everyone at North Oaks Financial Services,  have a safe and stress-free election day!