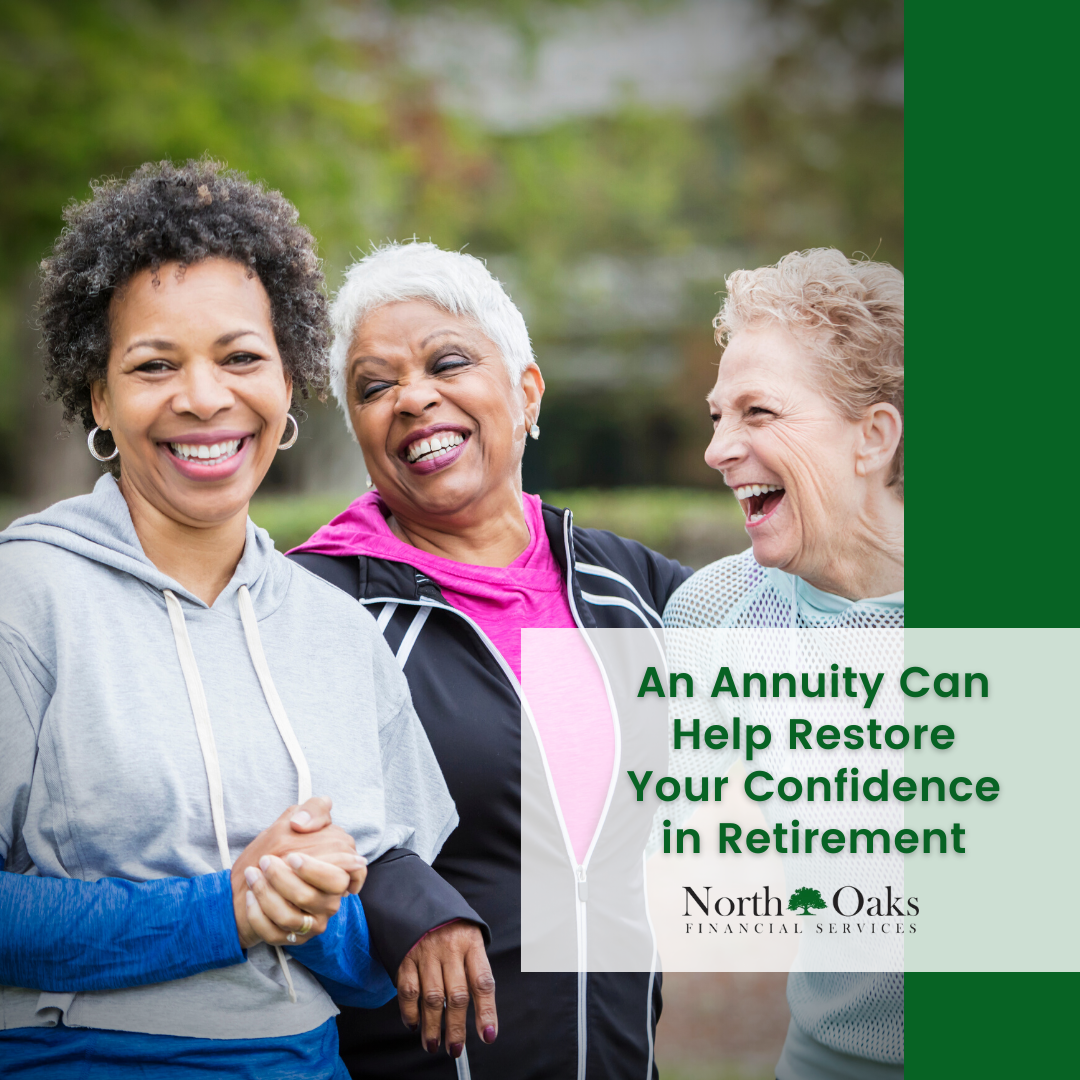 An Annuity Can Help Restore Your Confidence in Retirement

Sometimes we forget just how fragile a nest egg can be.

When the economy tanked in 2008, retirees watched in horror as U.S. markets suffered historic losses. The Dow declined by more than 50%, its biggest drop since the Great Depression of 1929.

The oldest Baby Boomers, who were closing in on retirement age just as things were at their worst, watched as their nest eggs cracked wide open and lost thousands of dollars – in some cases hundreds of thousands.

Most were left with two choices: Either keep working past the age they'd planned to retire (Boomers started turning 65 in 2011) or retire with a lifestyle that was substantially downsized from what they once had envisioned.

Under both scenarios, they could struggle to piece back together the plans they once had. But we all know how that goes. Time was not on their side.

Pre-retirement is one of the worst times to experience significant market loss, because there is often little time left for recovery. You need that nest egg you accumulated to generate income when the paychecks stop. If it shrinks, so will the amount of income you'll get.

That's why financial professionals talk so much about volatility and why you should start pulling back from risk as you get older. The markets will always move up and down. And given today's uncertainty -- both domestic and worldwide -- some loss seems almost unavoidable.

But there are distribution strategies that can help give you an edge in overcoming a loss.

For the average retiree, one way to help distribute retirement income is not by putting hope in the market, but by using an actuarial-designed product, such as an annuity. With an annuity, distribution amounts are, in large part, calculated based on your age and life expectancy; the older you are, the more you get paid.

But then he suffered through a serious market downturn, and his $500,000 portfolio was reduced to $300,000. At that 3% withdrawal rate, his annual income would decline drastically. In order to replicate the $15,000 per year he planned to pull from his portfolio, he would need to invest aggressively – meaning more risk and a greater chance of losing even more money.

Now, instead, let's say your friend purchased an immediate annuity with an A+ rated carrier. With a deposit of $209,375, he could generate the $15,000 per year in lifetime income he'd originally planned on. His purchase would be converted into regular payments that would last as long he lives. His annuity would guarantee him a 7.2% return, which could help reduce his fear of running out of money in retirement.*

Using an annuity to distribute income is a way to overcome market losses -- or to avoid them altogether. And it can offer you the confidence to enjoy your well-earned retirement through preservation of the principal and regular income streams.

It is important to remember annuities do have surrender charges, making them a non-liquid asset. Additionally, annuities do have fees and can limit your ability to participate in market gains, even with products such as fixed index annuities. However, some retirees enjoy the comfort of the steady income and the protection benefits offered by annuities.

Most traditional immediate annuities are pretty straightforward once you've made the purchase. But you'll definitely want to work with a financial professional to lock down what's an appropriate product for you, and to review any changes to your goals or financial situation as you age.

*Annuity guarantees are backed by the financial strength and claims-paying ability of the issuing insurance company.

These are hypothetical examples provided for illustrative purposes only; it does not represent a real-life scenario, and should not be construed as advice designed to meet the particular needs of an individual's situation.

The opinions voiced in this material are for general information only and are not intended to provide specific advice or recommendations for any individual security. To determine which investment(s) may be appropriate for you, consult your financial professional prior to investing.

All information is believed to be from reliable sources; however LPL Financial makes no representation as to its completeness or accuracy.

This article was prepared by The Kiplinger Washington Editors.