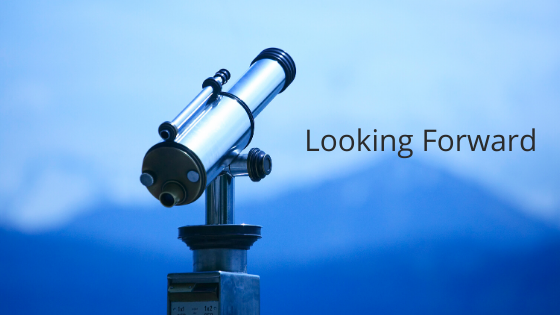 As we look ahead to the summer months, we can’t help but think what a challenging year it’s been so far. At the same time, we’re encouraged by the resiliency and accelerated innovation among US businesses and the efforts by our national, state, and local governments to support our communities. And we continue to be amazed by the unparalleled dedication and cooperation among our front-line healthcare professionals and medical researchers to see us through to the other side of this health crisis.

In a similar way, the recent strength of the financial markets appears to be looking beyond continued economic weakness. Much of the economic news has been dismal, and there may be more bad news ahead, but economic data is backward-looking. It’s important to remember that the stock market looks forward.

Economic numbers are still negative, but they aren’t as bad as they were a month ago, and that’s usually been a prelude to things starting to get better. New claims for unemployment are still historically high, but they’ve improved eight weeks in a row, and the total number of people on the unemployment rolls has actually started to drop (US Labor Bureau). Manufacturing activity contracted in May, according to the Institute for Supply Management Purchasing Managers’ Index, but it was better than the prior month for the first time since January. And new home sales actually rose in the most recent US Census Bureau data for April, when they were widely expected to collapse.

Small businesses are anticipating better times ahead, too. In a recent survey by the National Federation of Independent Business (NFIB), small businesses expressed the most optimism about the economy improving than at any time in the last year and a half. And if they expect improvement, they’ll prepare for it—by retaining or rehiring workers, restocking inventories, and continuing to follow best practices for keeping customers safe.

Looking forward also means gauging the ongoing impact of fiscal support. In the United States, Congress is working on a new stimulus package. The European Commission recently announced an unprecedented 750 billion euro stimulus. Japan has announced additional stimulus that could bring its total pandemic response to 40% of that country’s gross domestic product (GDP). While debt levels are rising and may have to be addressed in the future, these current fiscal actions continue to play an important role in limiting any long-term economic damage from the recession.

The stock market may have gotten a little ahead of itself, and there still may be bouts of volatility, but recent gains in the S&P 500 Index are not out of character. Like us, the markets are seeing things to look forward to. Consider the recent rally as the stock market’s version of anticipating dinner out with friends, enjoying a ballgame, or planning a vacation. These may not be right around the corner, and there may be setbacks along the way, but the plans have been made.

In the meantime, stay safe, thank you for supporting your local small businesses, and please contact me with any questions.